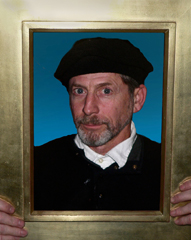 Christian White was born in Rome, Italy in 1953, while his father, sculptor Robert White, was on a Prix de Rome fellowship at The American Academy in Rome. He grew up in a family of artists studying drawing, painting and sculpture from a very young age. He began taking life drawing at Stony Brook University at age 10. He studied welding, stained glass and mosaics in Holland at age 13. He began studying painting in 1966 with Paul Russotto before attending Liceo Artistico in Rome, Italy in 1968-69. Christian has a BFA in Painting from  the Rhode Island School of Design.

Major early influences include his maternal grandfather, Dutch painter Joep Nicolas, family friend Fairfield Porter, Paul Georges, and Robert Kulicke. In Rome, Christian developed relationships with Jack Zajac, Gregory Gillespie, Gilbert Franklin and many other artists. He moved to Harrison Street in lower Manhattan in 1977 after graduating from RISD. He had his first solo exhibition in 1975 at The Harbor Gallery in Cold Spring Harbor, NY. His first solo show in Manhattan was at The Steven Adams Gallery in the East Village in 1986, followed by shows at Ingber Gallery, The Garrison Art Center and The Great American Salvage Company. He has had yearly one-man shows at Gallery North, in Setauket, Long Island, since 1983.

Mr. White’s work has been reviewed many times in the New York Times, notably by Hellen Harrison, as well as in many other newspapers and magazines articles. His work is included in many public and private collections.

Christian White has had several other careers. He was a gymnastics coach for 20 years, coaching Brown University’s Women’s varsity team as well as several New York City teams. He performed as a stage acrobat with the Metropolitan Opera, and danced with the Mussawir dance company. He has appeared in several national TV commercials and done stunt work and stunt coordinating in film and television.